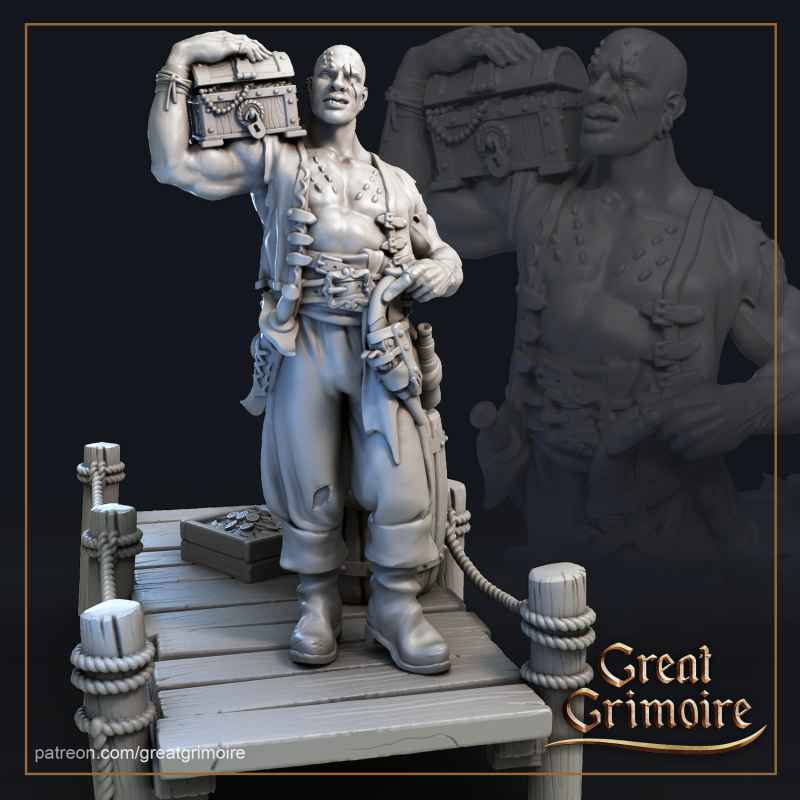 TINY SAM
“I wish wholeheartedly that something would happen,” Samuel Wilson, a midshipman of some thirty years of age, said to his chum, Jack Roberts, as they leaned on the rail of the merchant ship Swallow, and looked gloomily at calm sea that locked their ship in place.”

“One day is just like another – we clean, we carry the wares, we have a dinner and then we drink all night and play cards just to pass the time. When I became a sailor, I was dreaming of adventures, big battles, fights with pirates and sea monsters, quests for treasures and encounters with beautiful exotic women. And what did I get? I’m stuck with your drunk faces all day.”

“Stop that nonsense! – a scrawny puff-faced fella interrupted – don’t anger the sea gods. The sea is calm now, be thankful for that, you never know when… Wait… what is that on the horizon?”

Everyone turned to where he pointing at: a small black dot appeared in the distance. It was still pretty indistinguishable, but was growing bigger and bigger by the moment. “Hand me the spyglass. Now!” – Jack shouted - Sorrow on you, Samuel! That’s a ship. Huge ship with black sails. And it’s heading towards us at full speed. How are they even moving in this weather! Only if… no, please, no. There’s a legend about a cursed pirate ship. It appears only during the dead calm and is carried by the dark force of their hatred and desire for violence. No one has ever escaped from its grasp. Everyone, aim the canons, grab the rifles and pray to the sea god. Samuel, if we survive, I will feed you to the sharks myself!”.

In less than five minutes everybody on the shipboard could clearly see a massive vessel with fluttering sails and a raised black flag. No doubt those were pirates, merciless gang of cutthroats, led only by their greed and blood lust. The panic on the deck was almost palpable. Sailors were grabbing rifles, swords, knives, even the fishing tools, as though any of this could protect them. Some were hiding behind the containers, laying low by the rail or took off running below the deck to lock themselves in the cargo hold. The only person standing still was Samuel. Straightened up, arms crossed on his chest, grinning, he was calmly waiting or may be even anticipating the inevitable catastrophe.

The Swallow’s canons fired first. Bang! Boom! Wham! The roar of cannon balls crushing through the wood was thunderous, the air filled up with powder smoke.

“We hit them! Those vermins, let them sink to the bottom! We’ll come back home champions! From now on everyone will call us pirate slayers” – the crew started laughing and hugging each other, breaking into a dance. Joyous, they didn’t even hear the whistle and then – a sound of grapples being thrown at the rail. Seconds later the deck was crowded with more than a dozen of well-armed men firing their rifles at the unsuspecting sailors. In just a few minutes the battle was over. Everyone was either shot, pierced through or thrown overboard. Everyone except for Samuel.

“And who do we have right here, huh? You’re a big looking fella. I bet Fat Matty will make a nice dinner for the whole gang! Ahaha! Get him, boys!” – a toothless humpbacked pirate lisped, giving everyone a nasty grimace.

A dozen of other pirates surrounded Samuel, ready to slay him. Then, something much unexpected happened. Samuel dodged the first three attacks, simultaneously punching one guy in the throat, kicking the second in the stomach and lifting the third one, throwing him overboard. The rest of the gang seemed stunned for a moment, but then threw themselves at him with a ferocious roar. Bam! This one is punched in the teeth. Slam! The other one is pushed violently towards the mast with a sound of cracking bones hanging in the air. Bang! Bang! Two shots from the pistol are fired, piercing right through yet another poor bastard. There were only a few of the attackers left untouched. They looked at each other in fear as if asking each other silently “what should we do?”. And then, suddenly, whack! A harpoon pierced our hero through his left leg. Whack! Another one came through the right one. Samuel fell down on his knees.

“This one is tough. I like him” – a tall grim figure appeared out of the smoke. Dressed in a sharp-looking frock coat with a tricorne on his head, there was no doubt it was the Captain himself.

“You’ve beaten half of my crew” – he smiled – “I see no other option for you than to take their place. What is your name?”

“Samuel. Samuel Wilson” – the sailor replied calmly, concealing the fact that his whole body was in agony.

“Samuel Wilson. That is no name for a pirate. We’ll call you Tiny Sam. I promise you’ll enjoy the look on people’s faces when you enter the scene after we call for you. Welcome to The Black Tide, Tiny Sam.”